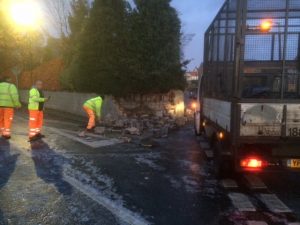 At 7:46am on December 1st, 2017, the maintenance team at N & S Group attended an emergency callout for a damaged stone wall, in the Doncaster area, which had been ploughed into by a lorry, skidding on black ice.

The driver never stopped, so we don’t know exactly how this happened, but the fallen stone was causing an obstruction, not only on the pavement but also on the road, where large pieces of debris were creating a potential hazard.

Cleaning and Making the Scene Safe

In corporation with the Council, the road and pavement were cleared straight away and the wall was made safe to avoid further debris breaking off. The area was cleared, gritted and cones and pedestrian signs placed in full view of the area.

Due to the icy conditions, the team had to respond in double quick time. 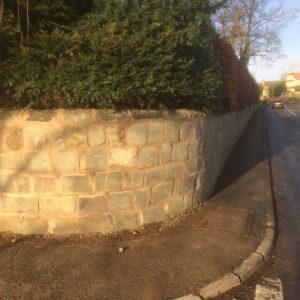 The team were able to start rebuilding the damaged wall at 9:30am, less than two hours after attending the scene. Fortunately, the original stone was able to be salvaged and it was successfully re-built.

N & S Group are currently preparing for action following the bad weather warnings this weekend. These accidents are just the type of thing that can happen when we’re not prepared for the weather. Please contact us for a winter service quote as soon as possible! Don’t leave it until the last minute!